Large property of 5,5 ha between sea and mountains.

Property of 5,5 ha for sale in Sicily. On the edge of the Madonie Park.
Near the beaches. Between sea and mountain.

The Madonie rise majestically from the waters of the Tyrrhenian Sea to reach a height of almost 2000 metres with the Pizzo Carbonara. One of the peculiarities that characterise the Madonie territory is the harmonious coexistence of sea and mountain areas. On the Madonie, which occupy only 2% of the island's surface, more than half of Sicily's plant species can be found, including several endemics.

The property:
Address: Contrada Rapputi, municipality of Gratteri, province of Palermo.
Lascari and its beaches 2 km, Gratteri 4 km, Cefalù 10 km, Palermo 60 km, Catania 180 km. Three international airports: Palermo, Catania, Trapani.
Access: Two entrances, a high one on the Campella road, between Gratteri and Cefalù, a low one, Contrada Rapputi, which leads directly to Lascari and its coastline.
A carriage road crosses the whole property from top to bottom.
The view of the sea, the bay of Palermo, the Aeolian Islands and the Madonie is breathtaking.
In the highest part of the land at 400 m above sea level, with a magnificent view of the Bay of Palermo, a stone ruin with a reconstruction permit for a house of 130 m2, on 2 levels. The permit also foresees the construction of a 25 sqm room, or magazzino, which could be used for an extra bedroom with private bathroom.
The adjoining land is 2.2 hectares and includes: a flat meadow, an orchard, olive trees, chestnut trees, as well as decorative trees, oaks, pines, acacias, mimosas, laurels, magnolia ...
The water supply is ensured by a deep well equipped with a solar pump which supplies 3 tanks of 15,000 litres each on a daily basis. The water is then distributed, by gravity, through a buried irrigation system and ensures the domestic and agricultural needs of the whole property. In addition, a spring near the house provides water all year round.
In the lower part of the property, at an altitude of about 300 m, on a plot adjoining the upper part, a new house of 100 m2 rebuilt on an old ruin, with an energy efficiency rating of A +++. It consists of a living room/equipped kitchen, two bedrooms, a bathroom and separate toilet. The house also includes a covered pergola (South / East) with a view of the citrus trees and the mountain; on the North / West side a large bay window opens onto the terrace with a view of the sea / sunset over the bay of Palermo. The construction of a room or magazzino of 25 m2 is allowed and can add a room with its toilet to the whole.
The adjoining land is approximately 3.4 hectares and is planted with citrus fruits, orchard, vineyard, olives, hazelnuts, chestnuts, almonds, etc. It also has a large stone basin which is supplied all year round by its own spring. This water supply supplements the central irrigation system coming from the upper part of the property.
Note: For someone interested in developing tourist accommodation, permission to build 3 additional bungalows of 40m2 each, plus terrace and cover, has already been approved by the relevant authorities.

The property has been cultivated and maintained for ten years according to the principles of organic farming, without chemical inputs or pesticides. It has been conceived, designed and developed according to the principles of permaculture. The abundance of water, the geographical position, the orientation, the view of the sea from everywhere make this property an exceptional place. 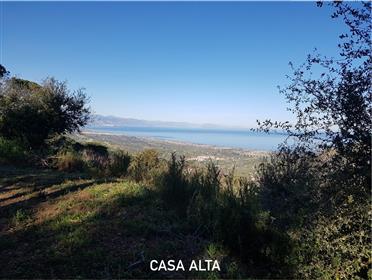 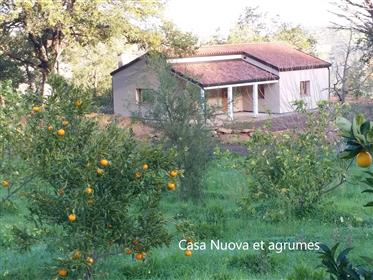 This property is near Gratteri, in Palermo (region Sicily).

In your space, save your alerts and favorites, and find the ideal house in more than 56 different countries.
Connect
Create an account
‹ › ×

Green-Acres reminds that the use of the form by professionals for the purposes of non-sollicited direct marketing (spam) is prohibited. In accordance with legal obligations, Realist records your internet address (3.236.107.249) and reserves the right to sue in the case of fraudulent use.