Santa Maria Maggiore, the main country of the so-called "painters Valley", is full of important nineteenth-century villas and twentieth century. It was a French-Italian family, who built the mansion in mid-19th century as an extension of a previous structure dating back to 1600.

Between 2008 and 2011, with three years of intensive restoration, the villa has been renovated and restored to its former glory, with a complete remake based on conservative criteria.

Already stepped through the gate we visit a residence of great charm and character: on the front of the House, we cannot fail to be impressed by a sundial in the French style of 800.

Just at the entrance, we breathe warm and austere atmosphere. The living area is hosting us, nothing is out of place. High ceilings, big fireplace and view of the garden from two large Windows gives us a joyful feeling. We pass to the studio, where the stone fireplace is the element which characterizes this place for its particularity: it was once a kitchen ...

While we try to see every corner of the House we do not know where to linger before the look: colors on the walls, doors, floors, bring us back to what it was this old mansion, but playing a timeless artistic touch, without harming the comforts of a modern home. Much attention also to the plants and window frames; creates a direct natural gas heating, to make your stay in this comfortable Villa from every angle.

Continue across the corridor, we enter into the large kitchen and then go out into a garden almost the intent was to keep it a secret. A magical space shared with the back of the beautiful house built in early ' 700 at the height of its fortunes in Germany by Gian Maria Farina, the inventor of Eau de Cologne. Before the Garden we go down and here's a pleasant surprise, a large wine cellar with high ceilings to be used, as well as to keep food and wine, even as local meditation.

On the first floor there are three bedrooms, a study, a large bathroom, a covered terrace of 25 square meters from where we can see the garden and where do we stand in complete privacy.

The third floor is an attic. Beneath the stone roof (completely redone), there is a separate apartment for guests, consisting of three bedrooms with bathroom and independent services.

Santa Maria Maggiore is a municipality in the Val Grande National Park and is located in Valle Vigezzo, Northern Piedmont, just a few kilometres from the Swiss border.

One of the biggest reasons to recall in Vigezzo Valley is skiing, thanks to the beautiful natural slopes which link together the major towns of the Valley through pine forests and beautiful landscapes. In Santa Maria Maggiore, at an altitude of 800 metres, the Centre of the Fund from which runs a competitive level of 15 km that touches the towns of Druogno and Malesco.

The renovations were designed by architect Lorenzo Abagnale, a professional known in the Valley for the recovery of other important villas. Among his recent works include the recovery of a library of the Vatican State, in via della Conciliazione in Rome.

It was recently inaugurated a new nine-hole Golf Club's par 29, flanked by a practice area with putting green and pitching green. The field is located in a splendid basin surrounded by high mountains and bordered by pine forests.

Photos See all the photos 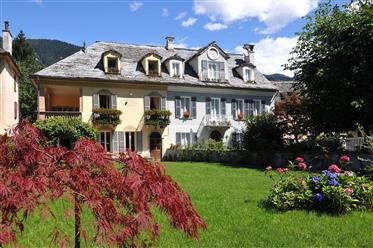 This property is in Santa Maria Maggiore, in Verbania (region The Piedmont).


Advice on buying a property in Italy : click to see our Italy buying guide.

To remember your favourites, connect:

Once you have filled out the request form, click on 'Send'. Then:

Green-Acres.com does not make any other use of the information supplied other than indicated above. Note, we do not pass your email address to any third parties other than the sellers concerned.

You benefit from a right to access, to modify, to rectify and to delete you personal data (Law of 6 January 1978 relative to IT services, to files and to liberties. To exercise them, address the: Realist - 100 boulevard du Montparnasse - 75014 Paris

The form will already be filled out in the future to make it easier to use. To delete the pre-fill facility: Click here

Green-Acres reminds that the use of the form by professionals for the purposes of non-sollicited direct marketing (spam) is prohibited. In accordance with legal obligations, Realist records your internet address (34.200.236.68) and reserves the right to sue in the case of fraudulent use.

Request the translation of this advert

Send this page to a friend

Your email has been sent

Thank you for your interest in our services.

Some listings are available in several languages. Choose the display languages on these pages to your order of preference by moving them.

Languages in order of preference

Locality of the listing